A BIKE THE BEST CHRISTMAS PRESENT EVER (Part 2)

Now living back in Ashington I thought my BMX days were truly numbered,but as well as a wife and son I had also inherited a nephew and as Christmas came around his mam was stumped as to what to get him.Of coarse I knew exactly what he needed a BMX. 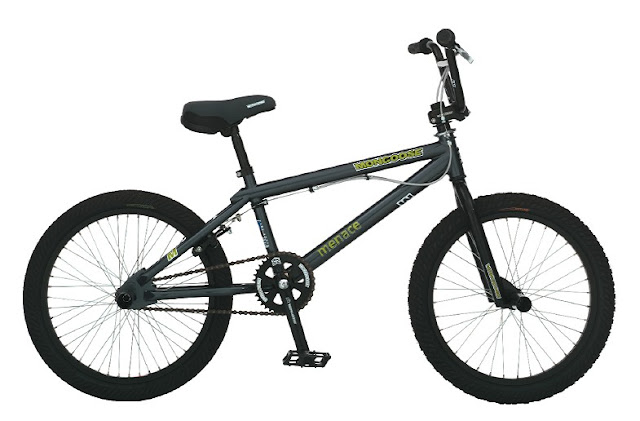 We purchased a Mongoose Menace, can't remember exactly but around 2004ish. Christmas morning he was extatic, but it was to be a couple more years till he realised just what BMX was all about. 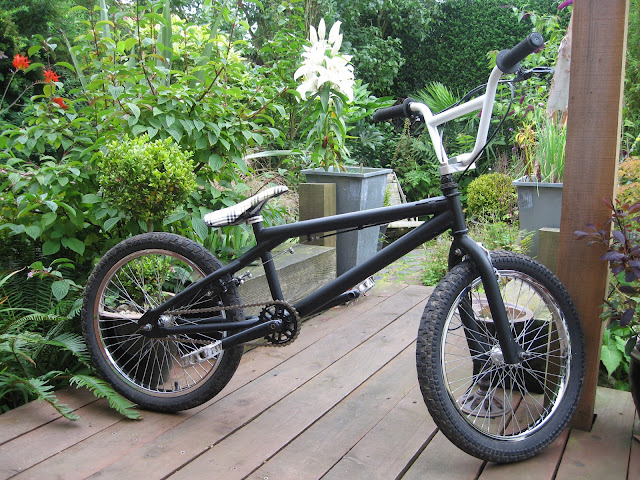 The realisation came at the same time I found an old Diamond  Back that someone had dumped beside my allotment. I sprayed it matt black and used some parts from the Haro Sport, I now had something that resembled a modern ride, Affy's Mongoose also got the matt black treatment and we set out to find places to ride.
I really wasn't intending to start riding again but taking Affy to parks turned out to be my excuse to try some of those old tricks I hadn't done in over 20 years.I was having fun. 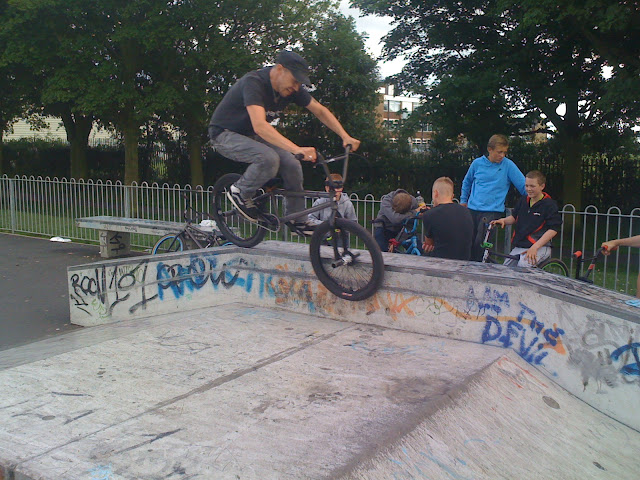 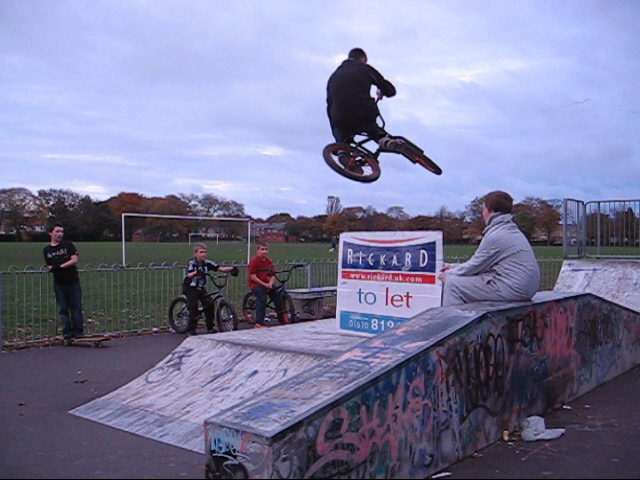 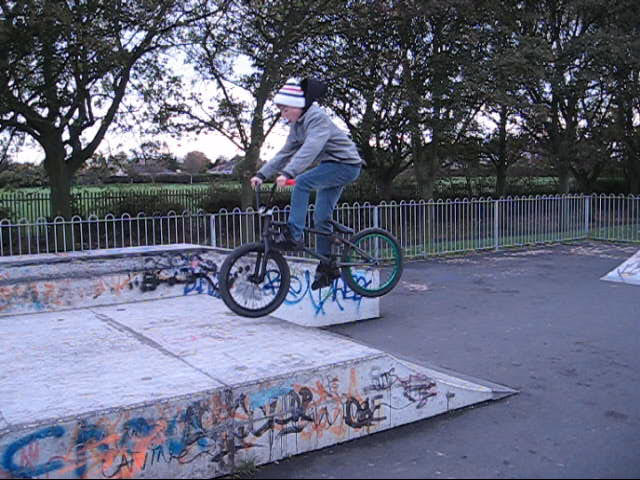 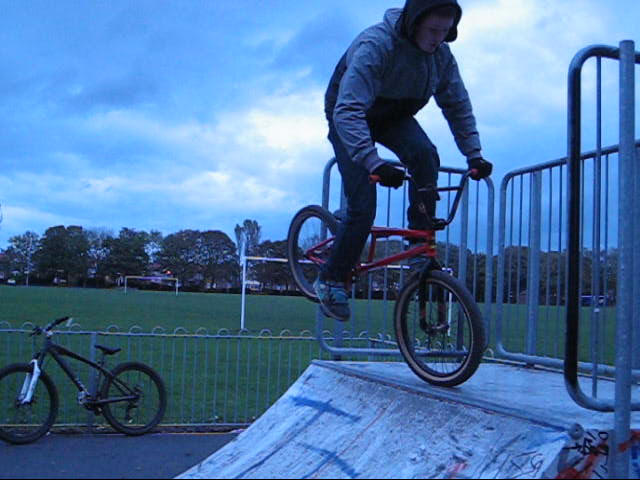 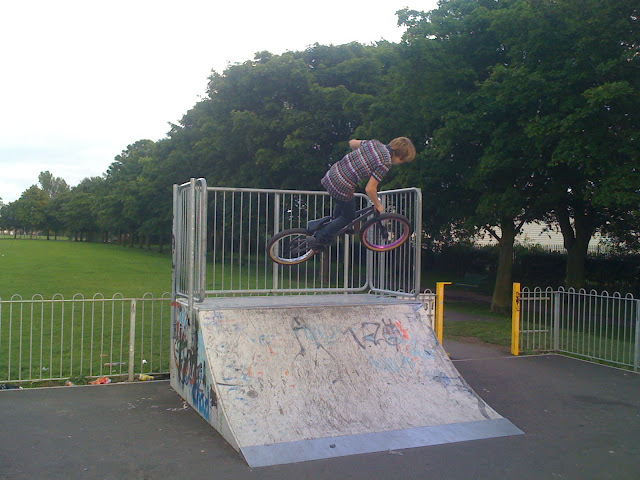 Affy Air
I found out what the internet was for and searched for any BMX related stuff I could find,I found Skateparks popping up everywhere and wondered if Ashington had one, I'd heard that some skaters had campaigned to get one built at Peoples Park.
We decided we should check it out, when we arrived we were shocked at just how small it was, nothing like some of the parks we'd visited or seen in videos, but it was in Ashington and I didn't have to drive so it became our local park. 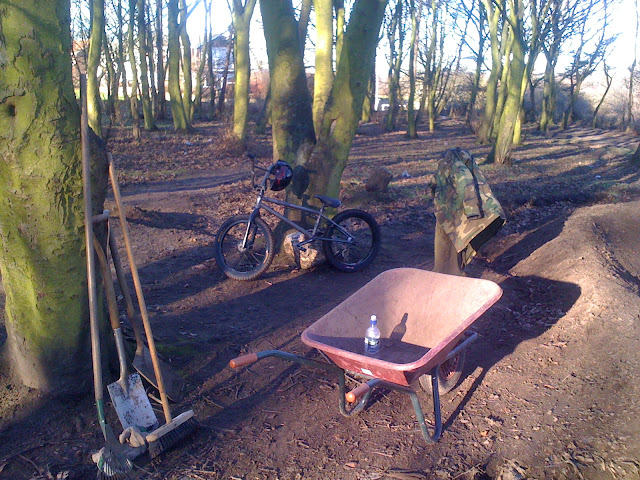 It was much easier once I took a barrow down 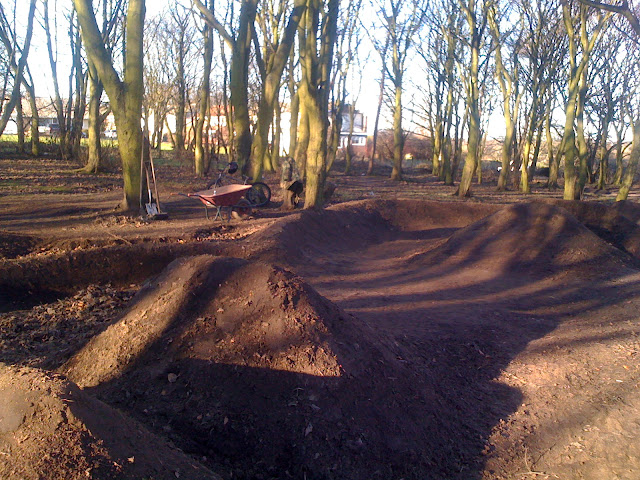 We met local riders and talked about the need for a bigger park, We were determined to get something built for ourselves.
I tried a few things, trail digging was the 1st as all I needed was a spade. I found a local spot known as the Privys,(right beside our new park) This gave my nephew and his mates somewhere to start launching themselves. 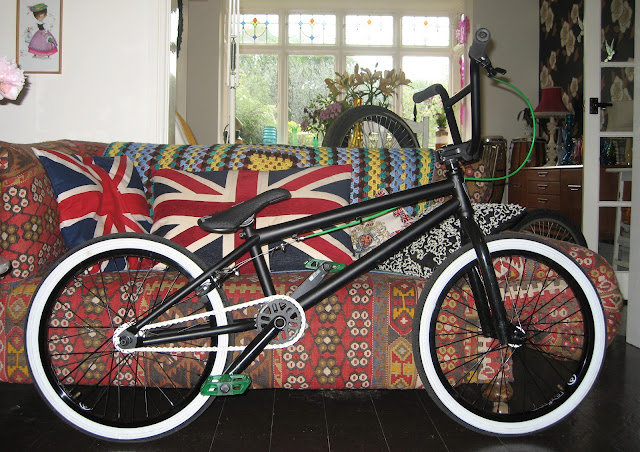 I Decided that an upgrade was needed on the bike front, this Diamond Back wasn't very up to date after all. I bought a United Trinity ( Cory Martinez Signature)frame and added some new parts, Affy also got himself a new ride We the People complete(and so started his ever changing set-up) Currently Hoffman Lady Luck Ben Hennon, and along with some other locals started hitting up a few local parks and spots. 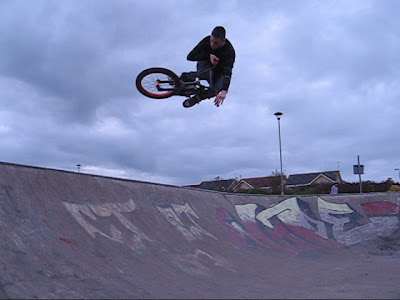 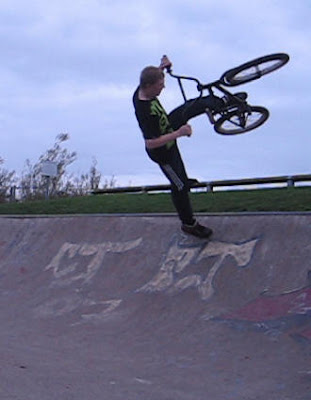 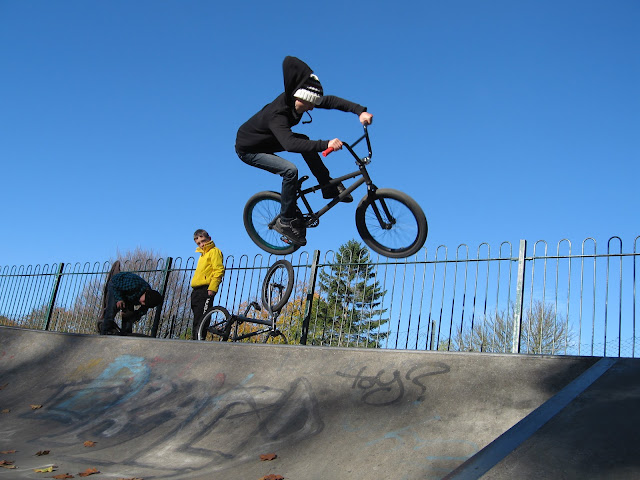 Affy Air
One of the spots we'd ride was a disused Warehouse, which we swept out of the 2" deep pigeon shit, changed the locks and got ourselves some ramps built out of these metal and polystyrene partitioning boards.They were really light, and supported by pallets and tyres they worked a treat, especially on wet days. Unfortunately the local pikeys liked to strip any metal from the warehouse and the owners got pissed and changed locks and welded it up. We'd lost our indoor spot just when it had got going.
Not detered I kept phoning anyone and everyone that I thought could help get things going again. 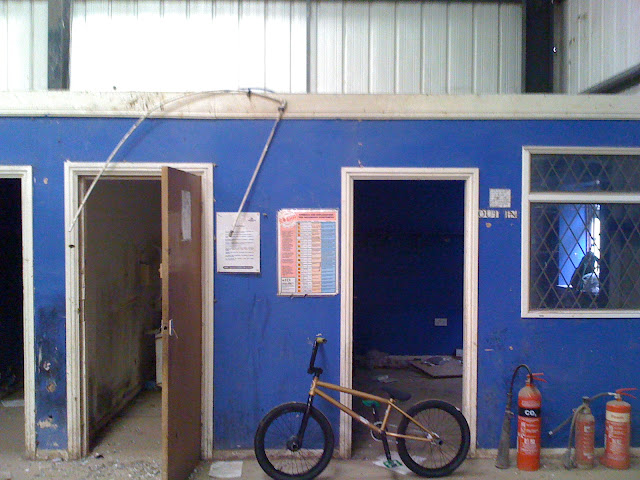 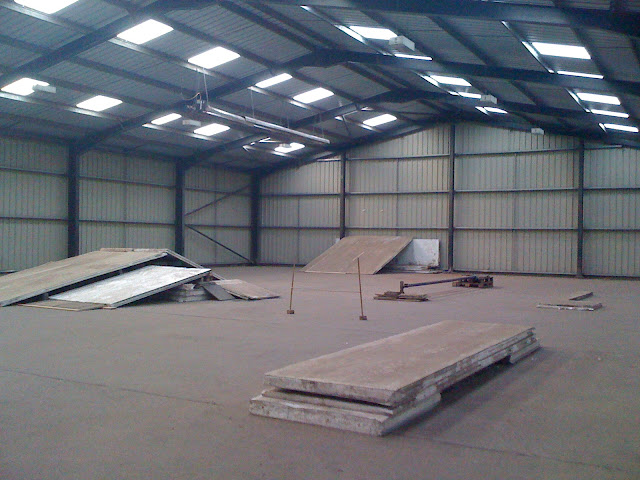 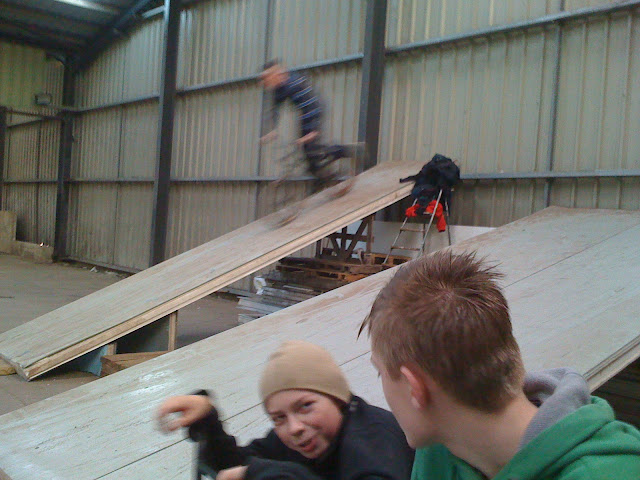 Fishy, Cottrell and Smiddy
The next project involved our group working with the Northumberland youth service. Forms got filled out and the old Co-op carpark was secured to build some wooden ramps outside, eventually with the aim of finding an indoor space again.
We got £4500 through Keyfund and Y fund to hire a container buy tools and wood and just as we were ready to start building the guy wanted his carpark back and there was a shake up in Northumberland youth service and we lost the youth worker we'd been working alongside.


As all this was happening we were told about a meeting at North Seaton community centre brought about by Jim Lang, a local councillor and community leader. The community group at Paddock Woods had been working on improving the local woodland and had received grants to put in paths, plant some trees and put in a play park and also picnic tables. They needed something else to get more people involved in the project and local kids thought a Skatepark would be a good idea. 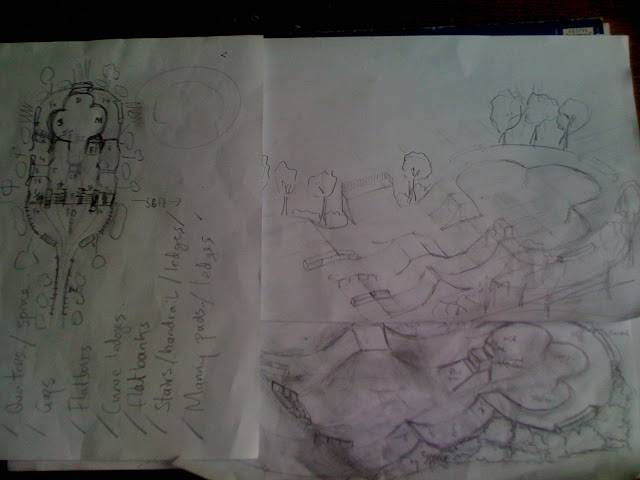 First sketch's
There was a good turnout at this first meeting and more meetings followed, drawings of possible layouts put forward and consultations with the local community took place. Now that these two groups had come together we could focus our energy's and make sure that this Skatepark would become a reality.

Dude Where's My Skatepark from 28 Something BMX on Vimeo.
Our case was put forward to the Fairshare panel  and a film shown that hi-lighted the need for a new park, ( yes its shit and was really embarrassing to be part of, but it helped in securing the Funds from the  Fairshare dudes)
At present we are forming an official group that will help in securing future funding that could be used to put in lighting or even a second phase.
I'd like to thank everyone involved in making this happen, Jim Lang and all at North Seaton Community Centre, Gemma Bone and all at Groundworks North East, Ashley Brown and Derek Gardner, Northumberland Youth Service, Brian Watson,Swinburne Horticultural, all at Wansbeck Community Voluntary Service, and anyone who has played apart in making this happen especially the riders.
We are also planning an opening Jam to be held on Saturday 16th June. Keep checking this Blog for updates and photos of what we're up to.
Posted by 28 SomethingBMX at 21:47