A BIKE THE BEST CHRISTMAS PRESENT EVER

I suppose this love of BMX started for me way back in 1979 when as a skinny wanna be 10 year old Punk I was in Fenwicks in Newcastle one Christmas and saw this vision in red and yellow, it stood out from all the other bikes, choppers, grifters, racers, 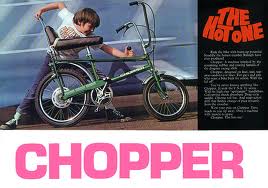 This bike was different, I could see myself bombing to school, popping wheelies and hitting some jumps on this.The bike was a Team Murray, a BMX the shop assistant informed me and my mam, "it stands for Bicycle Moto X" Now my mam didn't know much but she knew it sounded dangerous and so did I, The other option a Raleigh Chopper had different sized wheels again dangerous she thought.
So it was that day my Christmas present was decided upon the Team Murray it was and a life long love of BMX began. 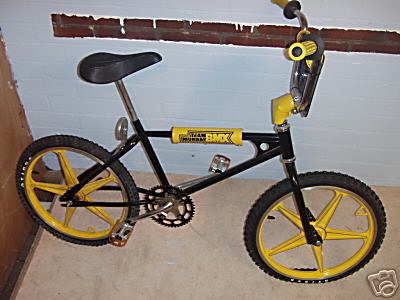 This is an image from the web to show the Team Murray BMX pads, below are some of me getting Rad! 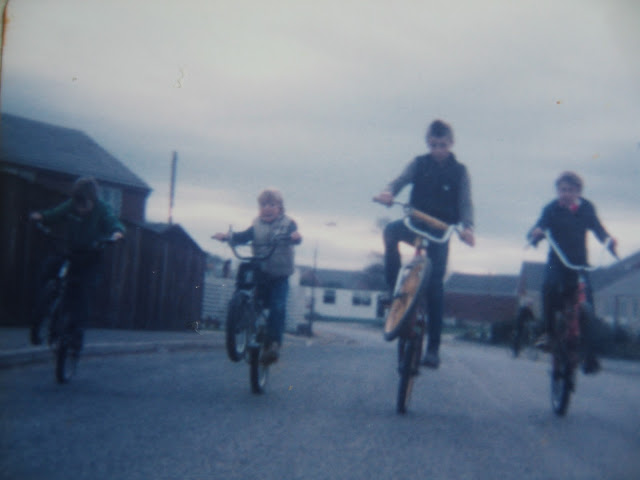 Notice the Chopper and I think  Striker. I was alone in my world of BMX for a while, but that following Christmas the Raleigh Burner Arrived,Yes! But now my Team Murray with its Cast Alloy Wheels seemed dated. must get it tarted up.
Some red tyres new grips and a stem that didn't have just one bolt would be the answer oh and some Mongoose Pads. It looked great! 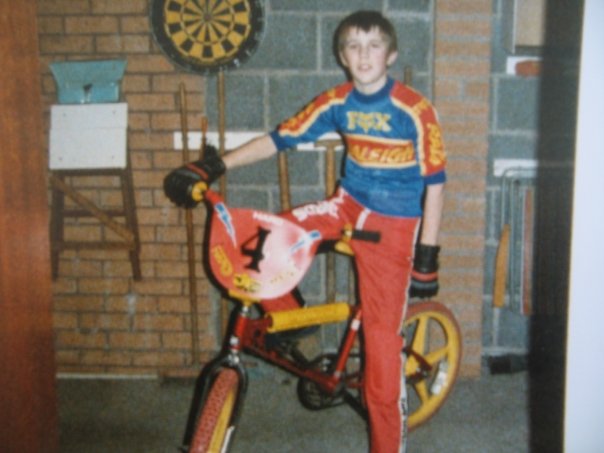 Looking like a proper BMX'er eh! the Halfords race pants and the fact I dont have proper gloves I'm wearing my slippers and have a dubious hair cut. Still I've got a Haro plate with my lucky Number 4 and Mongoose Pads. I was ready to set the BMX world on fire with some serious stunts. 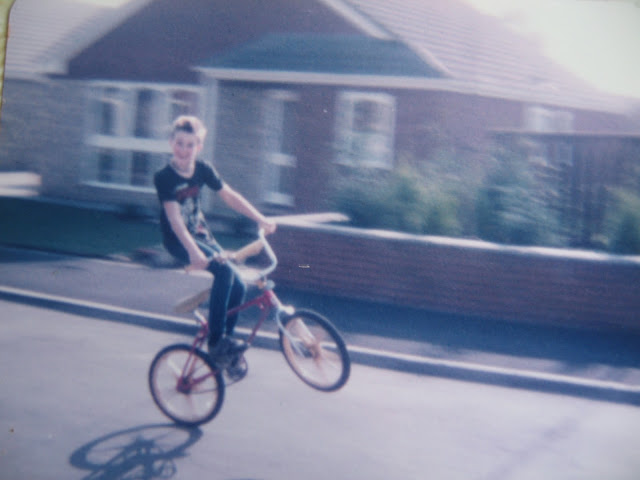 Got to start with a wheelie 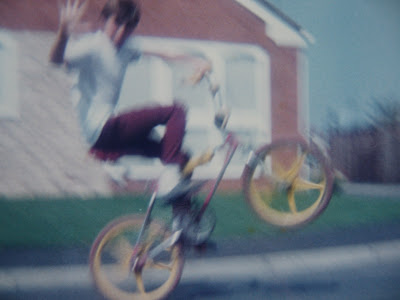 Now try the sit down wheelie, I think I've achieved a suitable balance point to try removing a limb.By this point the Team Murray has suffered a few breakages to the frame, nothing a bit of welding couldn't sort. might as well get the rest of the paint off now that the welds had took most of it off anyway. 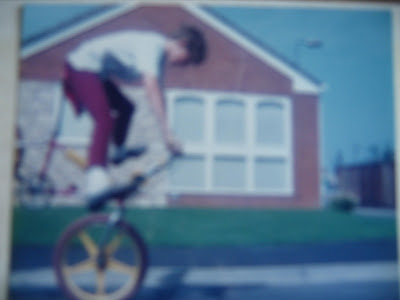 Don't need a curb for the endo's anymore, just slam the front brake on and try not to go over the bars and remove 2 limbs, Tech! haha! 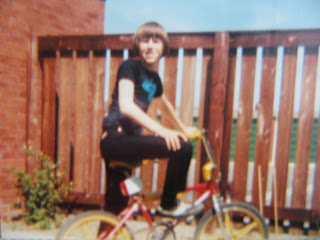 Things were going well for a while, then something started happening to my hair,  it seemed unable to stay in the spikey punk style I was after and became more bowl like, I could say I was going for the Joey Ramone look but this would be a lie. It was just another dodgy cut maybe from my mam who had aspirations of being a hairdresser or the barbers on Station Road.
At the same time my once gleaming Team Murray was looking like it was ready for retirement.There was going to have to be some changes, Andy Ruffell's bike didn't look like mine and he didn't have a bowl cut. 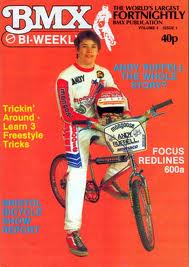 I'd missed the christmas deadline for a new bike this time having opted to do up the Murray, but it just couldn't take one more endo. Easter was just around the corner, best start to complain about my current set up and show the parents what the cool kids were riding. Magazines were bought with my paper round money and bikes were picked out, but which one to go for. A trip to the local bike shop, Sanders Cycles sorted it out, they had the latest Mongoose brochure. They were never going to go for the Pro Class, just below it was the Supergoose, it had the pro class wheels and full chrome, this was the one. 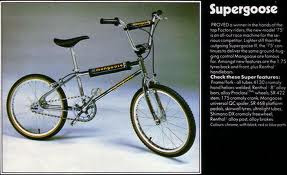 This time I was ready I had the bike and had invested in a pair of graphite coaster brake Skyways with whitewalls. Racing, Freestyle I would be able to do it all. Only one thing standing in my way, I live in Ashington not then or now the centre for BMX. I was going to have to get the parents to take me to races and competitions. Oddly their lives didn't revolve around BMX, they took me to a couple of races, which I did alright at but was always straight to the car to put on the Skyways and do some stunts. They might be faster than me but I bet they can't do as many back hops as me not to mention front hops. 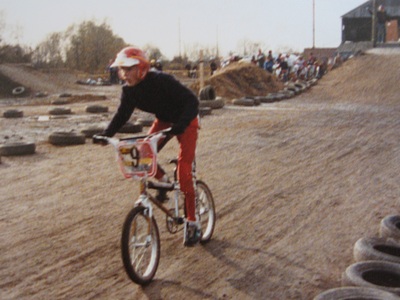 Should have stuck with my lucky number 4 plate, I was having no luck with that number 9, even with an Aero mesh plate I was still last out the start gate. But that was one determined racer I made it through a couple of heats and and almost into the final race.This time I got out that gate like a fucking rocket, there was know one in front, just keep pedaling, smooth over the jumps not much air keep the tyres in contact drop the shoulder into berms. I could picture myself holding that trophy, then with the finish line within spitting distance, someones on my shoulder I pedal harder lose control and there's a pile up, I get back on but to no avail, miss the final and go to carpark  and do some back hops. 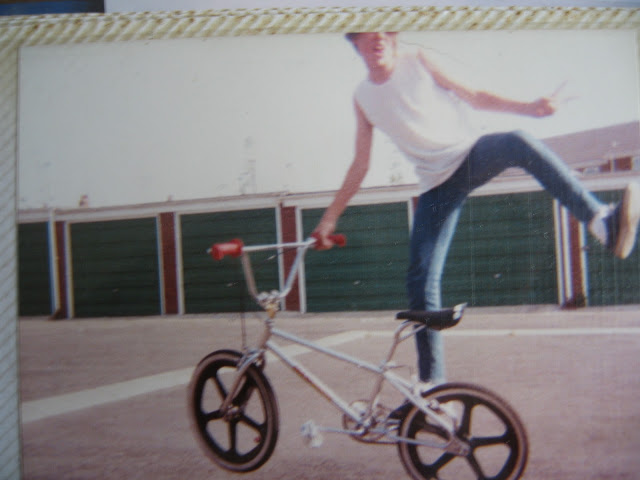 I wish we'd had the mobile phones back then to film our tricks, because this would probably have looked awesome, but looks pretty lame here. One hand one foot 360's haha! 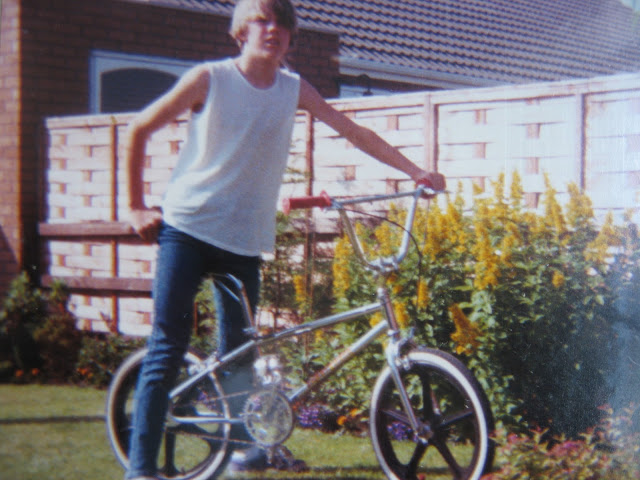 By the time I'd perfected my Andy Ruffell pose and added hi-lights to my hair things were changing, maybe it was the lack of anything decent to ride locally, the initial buzz of BMX had already started to fade almost disappearing completely. I was 16 other things started to appear in my life girls, Vespa's, I had decided that The Jam were really a Mod band and not real punks and Paul Weller had a new band anyway and Mods rode Scooters not BMX's 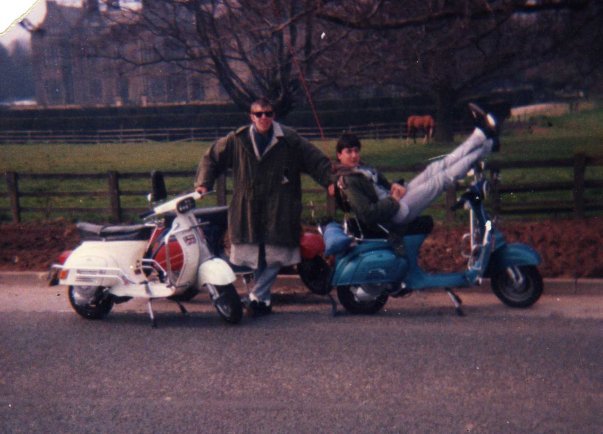 I got rid of my BMX and bought myself A Vespa 50 special and set of for Scarborough to start my new life as a Face, pulling birds, popping pills and dancing till dawn. but life was not really like Quadrophenia.I was never going to be Jimmy. I dropped the parker and entered fully and whole heartedly into the late 80's early 90's scooter scene. There were birds and pills and dancing the usual sort of stuff for a healthy young lad at that time.
Fast foward 7 years, it went on for a while. But those dreams of riding my old BMX just wouldn't go away, i'd wake up buzzing that I had a bike again.
Then I woke up one Sunday morning after a particually vivid dream, and that was it! I headed up to the bike shop at the top of Shields road in Byker, that is now the Edinburgh bike co (I was living in Heaton at this point) and purchased myself a 93 Haro Sport, it came with bash guard, pegs, of coarse these were quite alien to me, things had moved on in the seven years I'd been away. 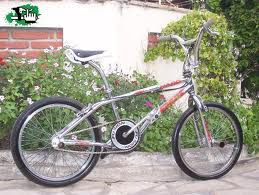 Time to hit the magazines and see whats going on, shit this stuff was crazy, there was know way I'd do that.
I found out those pegs were to be used to slide down handrails. Jesus! I'd just go in the back lane and do some of my old stuff, not as easy without the coaster brake but it started coming back. I hit up some flyout thing down in Jesmond Dean with some lads that lived up the road on Wharton terrace, wonder where they are, one lad was called James and had hair dyed in a tiger pattern, Rad!
But deciced I was to far removed from the present scene and my tricks out dated and ended up using the bike to get to work over in Jesmond .I was never going to get rid of this BMX but was I ever going to get Rad again, the dreams had stopped and I wanted them back if I'm honest, at least I could ride in my dreams.
I got on with my life the Bike always in sight leaning against a wall, I met my wife, moved back to Ashington, bought a house, and settled down to family life with my wife and son.
Posted by 28 SomethingBMX at 11:07